Major League Baseball’s Toronto Blue Jays have made good progress with the $300 million privately funded renovation that will transform Rogers Centre from a stadium into a ballpark.

The Blue Jays are undertaking a series of projects focused on modernising the fan experience by bringing fans closer to the action, introducing unique social spaces and amenities and building world-class player facilities.

Demolition work began on October 14 with 500L seat removal (all to be replaced for the 2023 season), followed by structural demolition of the outfield beginning on October 20.

The demolition was completed last week (November 18), culminating in 35 days of work and approximately 21,000 worker hours.

An average of about 110 workers have been on site daily, six days per week, including about 50 workers dedicated to demolition.

A 200-tonne crane was used for heavy structural removal, while small machinery was utilized to break up concrete

PCL Construction is the club’s construction partner for the first phase of projects, to be completed before the Blue Jays Home Opener on April 11, 2023

The outfield turf has been protected or removed in certain areas to facilitate construction, while the infield remains accessible to the Blue Jays Field Operations team to continue offseason work

The size of the stadium allows for multiple projects to progress at the same time, so while demolition was being completed, building began the second week of November with concrete poured in the 500L and new structural steel installation. 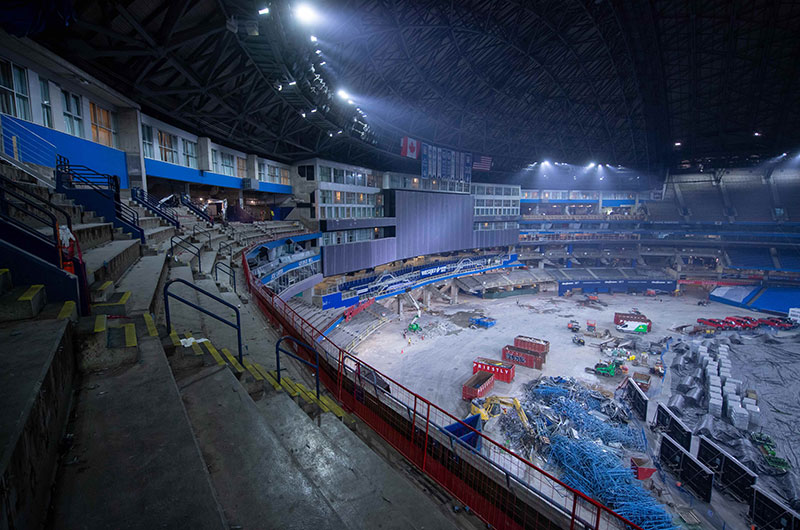 Rogers Centre was conceptualized as a multi-purpose stadium when it opened in 1989 and has not undergone a large-scale renovation in its 33-year history.

The scope of this project will address the most important challenges with the current stadium, while not rushing the necessary long-term work needed to maintain the ballpark for future generations of fans.

Projects will be completed during the offseason as to not impact baseball activity in-season.

After a successful partnership on the Blue Jays Player Development Complex, the club is once again working with industry-leading Populous on architectural design.