A FIFA World Cup Brazil Organising Committee (LOC) Management Board tour of venues has resulted in confirmation of all the original venues for the summer tournament. Six venues had previously failed to meet the 31 December 2013 deadline for readiness. At a press conference reported on Fifa.com, FIFA Secretary General Jérôme Valcke said:

It has been an important week because this is the last event prior to the week leading up to the World Cup, when we hold the FIFA Congress in Sao Paulo. It’s been important because we have reconfirmed Curitiba as a Host City and because we have reached an agreement with Porto Alegre regarding additional structures. There is still a lot of work to be done in both cities. We’ve seen a wonderful stadium in Manaus, and in Natal we need to make sure that we have the necessary test events. We’ve had an extremely productive board meeting today, with some very meaningful updates on transport, temporary structures at airports and urban mobility.

Arena da Baixada in Curitiba requires temporary works and the LOC reported that the home club is now cooperating and that contractors have brought in hundreds of extra workers to achieve a mid-May finish.

Two construction worker fatalities at Sao Paulo, which will stage the opening game, put pre-event tests there back until mid-April. There were three construction deaths at Manaus in the Amazon region and one at Brasilia. A fire and a crane fall added to the idea that preparations weren't under the control of the organisers.

Another visit to Manaus, significant for England fans, was that of Roy Hodgson (pictured in the changing rooms and on the pitch), whose reconnoitre was also a fence-mending exercise with local officials.

I am convinced that the representatives of the 32 national teams will leave Florianopolis full of confidence and looking forward to the start of the FIFA World Cup. It will be their job to ensure that happens on the pitch, while our mission along with FIFA, the government and the Host Cities will be to guarantee the very best services are available off the pitch. We will continue to work hard in our bid to organise an unforgettable World Cup. 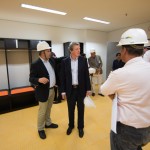 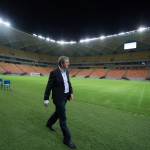