London-based architecture and interiors practice, Jump Studios, along with its parent company, Populous, has designed the interior of the new $1.1bn UBS Arena in Belmont Park, New York.

Situated within historic Belmont Park, the 17,255-seat UBS Arena is the new home to the New York Islanders of the National Hockey League. The arena was designed by Populous as a multi-purpose facility to host both hockey and live entertainment.

Working with Populous, Jump Studios has created a venue that celebrates Metro New York and Belmont Park, including its famous neighbouring racecourse.

The project presented an opportunity for Jump Studios to create a modern, 21st century experience for guests, while paying homage to a team and site that is steeped in history.

Jump Studios’ desire to honour the past as you journey through the arena is apparent from the outset. Fans enter the stadium through an entrance inspired by Grand Central Station and Park Avenue Armory. As you step into the Grand Hall, visitors are greeted by a feature ceiling resembling the night sky, with a mottled paint finish and embedded LEDs. 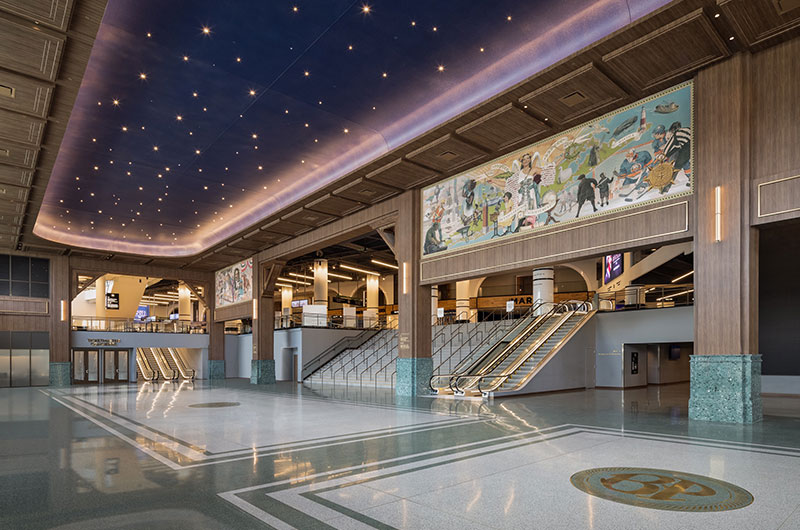 Moving into the main concourse, Jump Studios pays tribute to Metro New York. An articulated colonnade runs throughout the arena echoing the arches of Central Park, whilst tile designs inspired by the New York subway line the walls.

The arena’s food offering includes 18 market-style concessions, based on the city’s colourful kiosks that are a feature throughout Belmont Park. The upper concourse bars draw upon elements of Metro New York’s industrial heritage, as seen in the Brooklyn Bridge-inspired intricate cable work. Even the restrooms pay homage to the city, with the signage employing the familiar font of the iconic New Yorker Magazine. 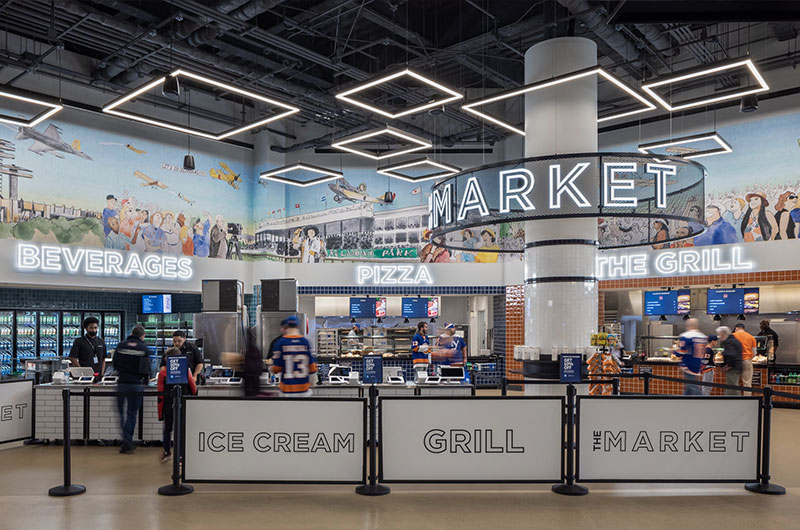 Jump Studios aims for UBS Arena to be more than a sports or music venue, but a complete fan experience in a beautiful space, employing the narrative storytelling also showcased in the practice’s work at Tottenham Hotspur Stadium in London, UK.

The main concourse corridor resembles a gallery where artwork, illuminated by spotlights, tells stories of the rich history of Belmont Park and the New York Islanders team, and colourful lighting modes create atmospheric thresholds as you walk through the space.

The scheme also seeks to celebrate the legacy of historical figures. Harriet’s Bar honours Harriet Quimby, the first US woman to gain a pilot’s licence after an aviation tournament at Belmont Park sparked her interest, while Eddie’s Bar celebrates Eddie D. Brown, who in 1870 became the first black jockey to win the Belmont Stakes riding ‘Kingfisher’.

Reaching the upper concourse, history is celebrated once again, this time focusing on the stadium’s home team, the New York Islanders. Four banners hang above the arena’s main Tailgate bar, proudly showcasing the Islanders logo alongside photographs of Islanders supporters’ clubs from around the world.

The inspiration behind UBS Arena centred around creating a space that offered a connection to the past by honouring the local history of Belmont Park and New York. By celebrating the area’s unique stories, including those of the New York Islanders, we aimed to create an arena that brings together the local community and establishes the venue as a high-quality destination for a number of different entertainment experiences.