MAJOR REVAMP ON THE BOARDS FOR GILLETTE STADIUM

The NFL’s New England Patriots will transform Gillette Stadium with the most dramatic improvements since its opening in 2002.

Work is due to get underway early next year on the venue in Foxborough, Massachusetts, and the project will feature a completely reimagined plaza leading into the stadium, including a new and enhanced lighthouse.

Inside the stadium, there will be a prominent new HD video board as well as new and improved concession locations and other fan amenities.

This new project, including the south end zone improvements made last offseason, will total an additional $225 million investment, which reflects the family's continued commitment to the Gillette Stadium fan experience for the next 20 years. The construction is scheduled for completion prior to the 2023 NFL season.

The transformation of the north end of Gillette Stadium will be defined by 75,000ft2 of glass-enclosed year-round hospitality and function spaces that bridge the gap between the East and West Putnam Clubs, the Dell Technologies Suite Levels and the upper concourse. All levels of the stadium will have 360-degree connectivity, a feature that is currently only available on the main concourse. 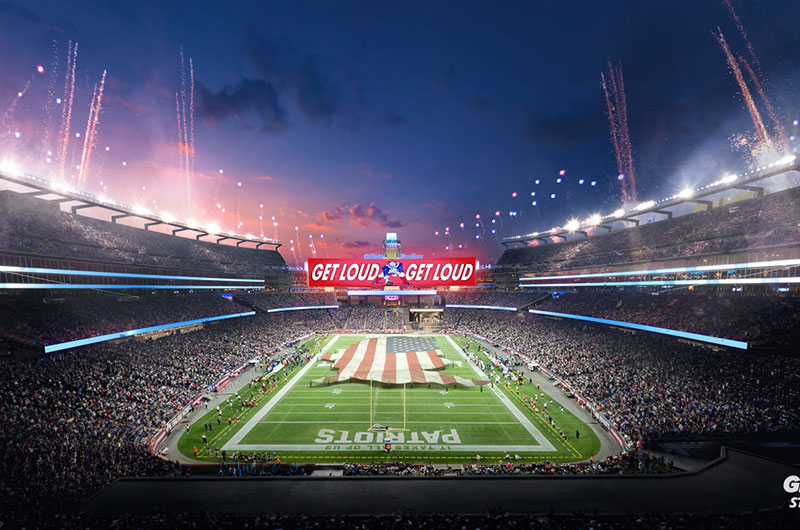 In addition, the renovation will include the largest outdoor stadium high-definition video board in the country, measuring 370ft x 60ft.

The 22,200ft2 of video board space will be nearly double the size of the new south end zone video board. The curved radius HD video board will provide game action, replays, statistics and fantasy football updates.

The architectural bridge and lighthouse have served as the stadium's signature view. This new development will feature a much bigger, more prominent lighthouse, standing 218ft high, complete with a 360-degree observation deck at the top, providing sweeping views of the stadium, the game field, Patriot Place and beyond.

This one-of-a-kind observation deck will be accessible to fans visiting Gillette Stadium year-round and available for private events.

The fan entrance into the north end of Gillette Stadium will also be revitalised. Plans for this area include relocating the entry gates to create a new fan-activation area upon entry to the lower plaza. A landscaped staircase will lead guests up to the main concourse, where fans will have a view of the field looking toward the south end zone video board and the New England Patriots' six Super Bowl banners.

The Patriots said that after privately financing the construction of Gillette Stadium, the Kraft family has continually re-invested in stadium improvements to keep the fan experience ahead of the ever-evolving sports and entertainment industry trends.

Some of the most notable additions in recent years were communal fan gathering spaces, including the Optum Field Lounge, the Encore Terrace and the Cross Insurance Pavilion & Business Center.

There have been numerous other enhancements made, including the addition of ribbon boards, video boards, WiFi and innovative concession upgrades. In 2021, the south end of Gillette Stadium underwent significant renovations which incorporated a modern and more streamlined concession area on the main concourse and a new, higher-definition video board that is 70 percent larger than the one it replaced.

More details and images will be shared as plans are finalised in the coming months.

MAJOR REVAMP ON THE BOARDS FOR GILLETTE STADIUM